The Devilish Complexity of Cysteine Modulation in Protein Function

There exists a devilish complexity in the vast array of biological modifications that can alter the free thiol or sulfhydryl group, which is the reactive group of the essential amino acid cysteine an important amino acid of many important biological proteins. The thiol group is vitally important for its ability to form disulfide bonds with other thiol groups and to form either reduced or oxidized (redox) forms that may further interact reversibly or irreversibly with a panoply of other chemical and biological molecules. In addition, many of these forms have their own redox and pH-dependence that determines their successive reactivities with other chemical or biological molecules, which only adds further complexity to this already overly complicated picture.

Unfortunately the experimental expertise necessary to deal with this burgeoning complexity has fallen behind. Experiments often control for temperature and pH and occasionally for the redox environment and ionic strength. However, there are further complexities that are much more difficult to measure and control. These complexities include evaluating the previous exposure of thiol groups to thiol modifying agents and conditions that render them either reversibly or irreversibly modified. In addition, there are time-dependent factors such as the release of nitric oxide (NO) from S-nitrosothiols that may function as a storage form of NO (1) and the additional confounding factors that include successive thiol oxidations to sulfenic acids (R-SOH), sulfinic acids (R-SO2H) and sulfonic acids (R-SO3H) (2). These oxidations also change the pK of the thiol group towards successively lower values (3) .

In many important biological and cellular proteins, the free thiol group of cysteinyl side chains is particularly susceptible to oxidative modifications such as the formation of intermolecular or intramolecular disulfides between other protein thiols or other low-molecular-weight thiol molecules such as glutathione (4). This may also occur by thiol-disulfide exchange or disproportionation reactions. The modification of cysteine thiols by incorporation of NO moieties such as S-nitrosylation or incorporation of glutathione moieties (S-glutathionylation) functionally blocks thiol groups from additional oxidation reactions that could irreversibly block their biological functions. Some reversible modifications may be essential in preserving vital intracellular proteins and membrane receptors, thereby allowing them to eventually return to a functional, free thiol state.

Thiol modifications are produced by a number of reactions induced by a vast number of reactive species. These species include nitric oxide-related species, other proteins or organic molecules with or without free thiol groups and metals that can form reversible redox-cycles or that primarily complex with and deplete glutathione levels or directly bond with free thiol groups (5). These reactions all have their own pH and redox dependence, which further complicates experimental efforts to control for thiol reactivities toward these large number of potentially reactive molecules. Measuring how and under what conditions these reactions can be reversed requires much more experimental work.

Altogether, it is a bit like trying to reverse the development of a photographic plate. The photographic reactions leave their history as an imprint on the plate, but just like an incompletely fixed photographic plate, there may exist other areas or reactive groups that can undergo further reactions given the proper set of experimental conditions. Studying the reactivities of the thiol groups of biological tissues may be very similar to the photographic plate analogy. Once they’ve reacted, it is very difficult to bring them back to their functional in vivo state. Currently there is relatively little recognition of these problems and little or no attempts to address them with suitable experimental controls.

Since this is a critical area for future research, suggestions for improving the experimental strategy may entail treating the cells or tissues with sulfhydryl chelating agents at various times during the experimental preparations so that we may begin to understand how successive handling and extraction procedures modify these critical groups. Using a protocol of successive sampling, the relative exposure of thiol groups could be determined at critical steps in experimental protocols that extract and purify biological proteins. Then the effects of these procedures on thiol modifications may become better understood and more readily controlled in future experiments.

Only by careful analysis and systematic experimentation can we begin to understand the role of thiol groups and their contributions toward the finely balanced control of a great number of critical biological functions (6-17).


References (Since this isn’t intended as an extensive review, these are only a minimal number and I apologize if I have left out other important references): 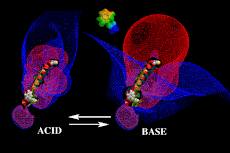